Spotify has established itself as the leader in the music streaming market, and it is way more ahead of Apple music. The media service firm, which was founded in Sweden, has bridged the gap between listening to music and purchasing MP3 tunes online. It has improved how people listen to music all across the world.

Today, we will validate the fame and popularity of this music streaming giant by looking into some of the interesting stats for Spotify. Till the end of this article, you will get a basic picture of how Spotify changed the music industry for good. But before talking about the Spotify stats, we will see the history of Spotify.

Spotify: A Revolutionary Idea That Captivated The Music Industry

The motion picture and music industries, in particular, have long been troubled by content theft. Spotify was launched with the overarching goal of eradicating illicit record distribution by providing a place for artists to upload their work and be compensated in royalties. Daniel Ek and Martin Lorentzon (founders) thereby opened the doors to a worldwide avenue whose full potential has yet to be fulfilled.

Spotify, on the other hand, is getting there. It initially paid record labels a 20% up-front fee for access to its platform’s listening base. Let’s take a short look at its timeline:

Spotify made a rapid success by quickly releasing its code with iOS developers. In the same year, Spotify made $244 million in revenue but lost $60 million. In the grand scheme of things, this is a tiny setback. The Spotify stats website shows its growth timeline using the given graph: 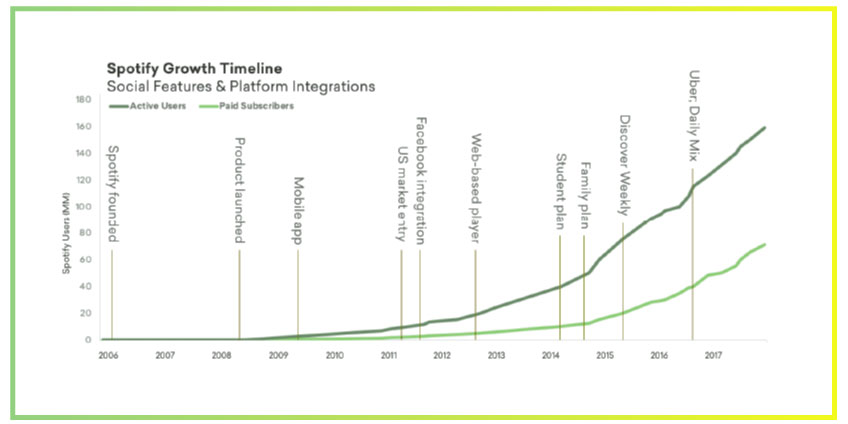 According to Spotify wrapped stats, it had 144 million monthly active users as of June 2017. (MAU). By the second quarter of 2019, it had almost doubled that, with 232 million MAUs. The overall number of premium Spotify customers is estimated to be in the 100 million range. Spotify has 36% of the worldwide music streaming market at the time of writing. 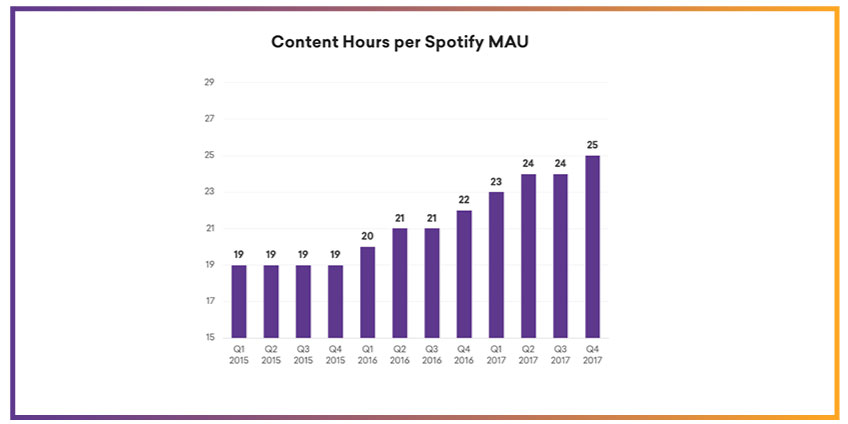 As to the question ‘how to see Spotify stats’, you need to Google Spotify stats and open the very first link that appears on your search result. It will redirect you to the homepage of Spotify from where you could see the official stats of Spotify. =The streaming service has 50 million songs and listeners spend an average of 25 hours a month on it.

Investors have been rewarded for their trust, with the overall worth of the Spotify business evaluated at $26.5 billion at the end of its first day on the New York Stock Exchange. To put it mildly, Spotify’s net wealth is enormous.

Of course, when predictive computers know your next click better than you do, content selection will be spot on. Users get addicted to the programme as a result of its ruthless accuracy and accidentally increase their listening hours on a daily, weekly, or monthly basis.

According to Goodwater Capital’s study, an average Spotify subscriber consumes 25 hours of music each month.

That was in the fourth quarter of 2017. According to Spotify listening statistics, music consumption grew during the same period, with typical Spotify customers listening to 40 different artists every week. You can see the Spotify artist stats in the following graph: 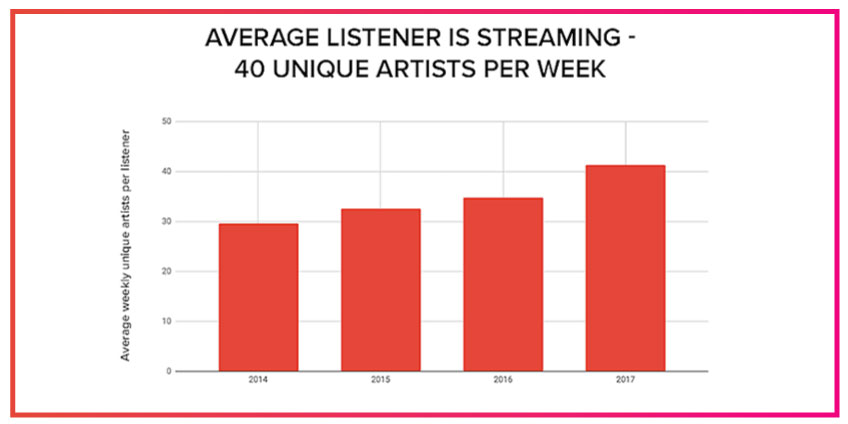 This tendency, as part of the chain reaction, translates into an increasing number of Monthly active users, as mentioned at the start of the article. But what about the demographics of the users? Spotify took a large slice out of the Under-30s listenership (2017), according to a Goodwater poll of 3000 American music streamers, but only narrowly lost out to the Over-30s. 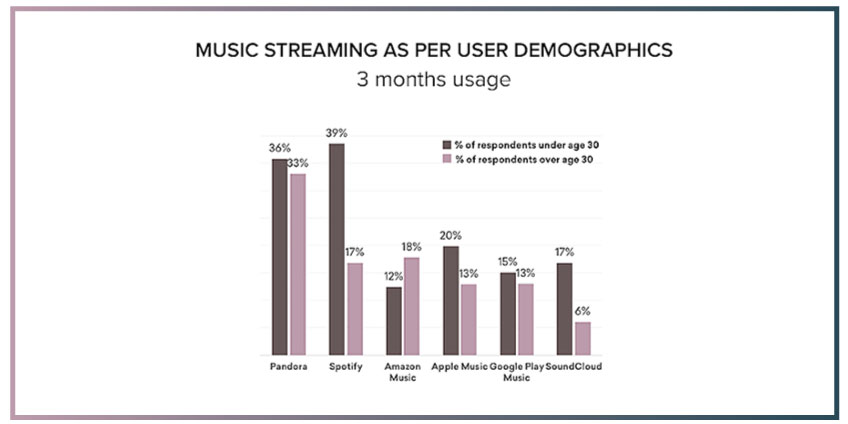 The number of Spotify streams is determined by several things. It starts with a user’s overall predilection for a genre, which is then followed by predictive suggestion in several cycles. Regardless, it is easier (said than done) for an artist to persuade fans to stream a complete album following a popular single.

Ed Sheeran’s Shape of You is currently the most popular song on Spotify. Curating numbers and determining a song’s general stickiness is fascinating. In actuality, the impact is symbolic of a specific artist’s global popularity, which includes non-English speaking nations. We have provided a pictorial representation so that you could have a better picture of Spotify music stats: 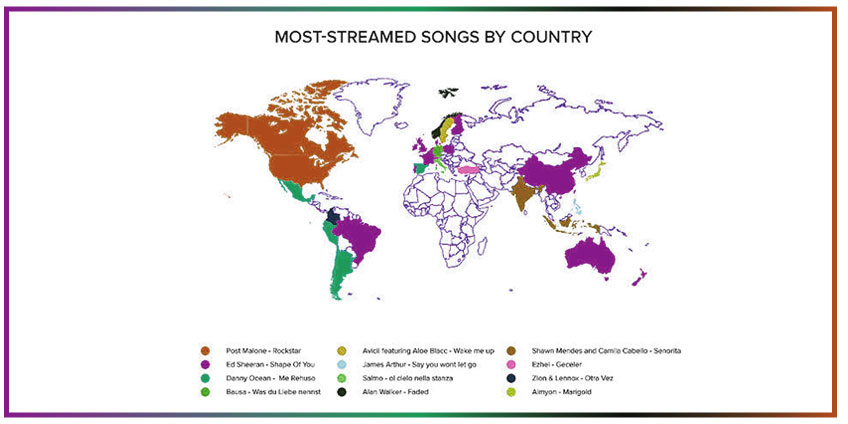 You can see the Spotify playlist statistics from the above graph. We can say that people prefer pop over any other genre on Spotify.

After watching an appreciable growth in Spotify statistics, its rivals have jumped on the bandwagon to capitalize on the benefit of using existing user bases to broadcast music directly on parent applications. Spotify’s closest U.S. rival, the trillion-dollar corporation Apple, is an example of this.

In 2015, the latter launched its music streaming service Apple Music, which has already made a dent in Spotify’s sales in just four years. It surpassed Spotify’s total paid U.S. subscribers in 2019, with 28 million compared to Spotify’s 26 million.

According to Spotify statistics website, Spotify continues to pull harder in the global tug of war, with 110 million paying members against Apple Music’s 56 million. Many say that Apple Music will win out in the long term because the software comes pre-installed on 900 million iPhones worldwide.

Even if the firm converts half of it, the total number of listeners would be quadruple what Spotify reports as of this writing. Apple’s acquisition of Shazam appears to be aimed towards streamlining its music offering. Another step in that direction would be Apple’s discontinuation of iTunes, which would split the 18-year-old service into three income streams: music, television, and podcasts.

As a result, Apple Music will compete with Spotify for music and podcast audiences, taking the fight to Spotify, which has been swallowing up podcast companies like roasted chicken. Users may listen to music on all Apple devices, including iPhones, Macs/PCs, and Android smartphones, which have a combined user base of 2 billion devices. On Apple Music, you can download up to 100,000 songs against 50,000 on Spotify.

Non-Prime members, Prime subscribers, and Echo users all have different payment options. The United States of America is Amazon’s backyard, and the corporation is making the most of it by tapping into its Echo and Prime customers. Their music services attracted 32 million customers between 2018 and 2019.

During that period, Amazon Music Unlimited has expanded at a 70 per cent clip. This amount, although theoretical, outnumbers both Apple and Spotify in terms of domestic customers. By watching the Spotify genre stats, we can see that another area where Amazon outperforms Spotify is among U.S. listeners aged 50 and up.

It would be a mistake to dismiss Amazon from the list of Spotify competitors. Non-Prime members are charged $9.99 per month. If you currently have Amazon Prime, you may upgrade to Amazon Music Unlimited for an extra $7.99 per month.

After knowing the Spotify personal statistics, it’s time to head towards the last section of our article where we will mention how Spotify revolutionised the music industry!

How Spotify Changed The Music Industry?

Napster, Limewire, and others introduced illicit downloading and file-sharing, which resulted in such widespread infringement that it seemed the genie could never be placed back in the bottle.

However, Spotify made legal streaming so simple that, when paired with the music industry’s (at times obnoxious) consumer awareness efforts, new generations were trained to pay for music once more, although at a fraction of the cost of a CD. However, little was better than nothing at that moment.

Being musically exploratory back in the CD era was a costly luxury: how many people spent roughly $20 for an album they didn’t like? However, for $10 a month, subscription services allow users to discover an unlimited number of artists, genres, and sounds. Spotify has been a boon to experimentation for music listeners and musicians alike as a result of its accessibility.

Not only has streaming spawned genre-defying genres like SoundCloud rap, but according to a 2019 poll by research company YPulse, 85 per cent of millennial Spotify users claimed their music tastes aren’t limited to one genre.

Spotify has long been chastised for its free (or “ad-supported”) tier, which allows users to stream as much music as they want in exchange for seeing the advertising. Despite this, Ek and Spotify representatives claimed that the free tier was a viable on-ramp for paying users.

Not only have streaming services broken down many conventional musical genre barriers, but they’ve also recategorized many of them into “moods” via playlists pioneered by Spotify. The company’s dedicated editorial staff has been creating emotive and genre-less playlists, such as Mood Booster, which comprises upbeat, optimistic music from various genres, since the early 2010s.

The idea of autoplay as we know it now did not exist before the streaming age. Given the small user libraries of digital download markets like iTunes, there were few genuine options to give new music suggestions without the user purchasing to bulk up their collection.

However, with the development of streaming, DSPs such as Spotify may be able to provide consumers with more material after their current playlist or album has ended, such as algorithmic suggestions for new songs that suit the playlist’s theme. Spotify was the first on-demand, audio-only streaming service to promote autoplay, which is now a standard feature of all streaming services.

After COVID-19 wreaked havoc on the live music business, Spotify stepped in with Artist Fundraising Pick, a new tool that allows fans to “tip” or give directly on the artist’s website. The funds raised through this new feature might be donated to a charity of the artist’s choice or paid straight to the artist’s bank account, giving much-needed respite during the downtime.

Some musicians and commentators have criticised the function, with one calling the tip jar a “tacit acknowledgement that artists are not getting paid enough” by Spotify.

Spotify’s playlist Your Daily Drive, a tailored selection that incorporates news report podcasts and songs from the user’s listening history, has been experimenting with the notion of interlaced spoken word and music since 2019.

However, Spotify’s self-owned podcast creation platform Anchor just launched a feature that allows podcasters to seamlessly insert complete tracks from Spotify’s collection into their broadcasts without the need for an additional licence.

Anchor’s latest feature, which was announced in October, is a significant step forward for podcast makers who have long struggled with the format’s complex and expensive licencing procedure and enables more creativity in the area.

Spotify Canvas, one of the newest additions to this list, was first made available to select artists some years ago, but it was just recently released from beta in February 2021. As the song plays, artists can post a customised 5 to 8-second video loop to match the cover image. Within the framework of an audio-only streaming experience, this interactive art allows artists to provide a more nuanced depiction of their creative vision.

Spotify Stats: Proclaiming Itself Every Year For Good

In the first half of 2019, music streaming accounted for 80% of the music industry’s income. According to Spotify stats, it is the app with the greatest stake out of that 80 per cent. That demonstrates how quickly the change from physical to digital music, which is far from done, has occurred during the last decade.

Spotify, as an early entry, is primed to take the lead, but the streaming business does not appear to be on the verge of becoming a monopoly. If anything, we’re seeing the emergence of a triopoly, with Spotify and Apple Music balancing each other out and Amazon not far behind.