Cryptocurrencies have quickly risen to prominence as one of the most significant investments of the twenty-first century. As the industry continues to grow at a rapid pace, several cryptocurrencies have emerged as the most valuable assets to date. Cardano (ADA) follows Bitcoin (BTC) and Ethereum (ETH), which have secured their positions as the two most prominent cryptocurrencies. Also, Cardano price prediction shows a massive increment graph.

Cardano is a Proof-of-Stake (PoS) cryptocurrency in which users can stake their ADA tokens and earn handsomely after the staking period is completed. In terms of the environment, this approach has shown to be more efficient than Proof-of-Work (PoW).

Cardano was one of the first projects to be formed and developed based on thorough research, with visions and innovations that have met the demands of users, making it a top three cryptocurrency by market value. Cardano has added smart contracts to its network, leading some to assume that in the long term, Cardano will be able to overtake Ethereum. 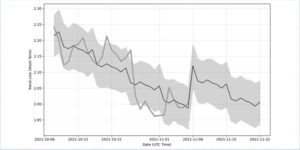 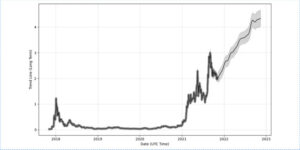 Cardano’s current price is $2.2, however, it is subject to vary over time. It may not be able to compete with Bitcoin’s stratospheric heights, which are presently hovering around $53,929 (and are predicted to shift in the next years), but this price still shows a phenomenal growth rate.

Indeed, this rise aided ADA in achieving newfound prominence, with Cardano being the third-largest cryptocurrency. With an all-time high of $98.91 billion, the Cardano platform fell short of its triple-digit ambition. Cardano, which has surpassed competitors like Litecoin and Ripple XRP, is presently one of the most promising crypto platforms.

But will Cardano achieve new heights in the upcoming investment quarter or will it dip like various other overnight sensations like Dogecoin? What is the Cardano price prediction for the upcoming years to come? We will go through every detail in this article. But before jumping to that part, you need to understand what Cardano is!

Cardano is a decentralised blockchain platform led by Charles Hoskinson, co-founder of Ethereum. The platform’s development began in 2015, and it was released in 2017. Its claimed purpose is to make the blockchain network more environmentally friendly and scalable, in part by lowering the need for energy-intensive bitcoin miners.

Cardano is to ADA what Ethereum and Ripple are to ETH and XRP, respectively. Cardano is the name of the platform that runs the native cryptocurrency ADA, in layman’s words. Cardano is a decentralised blockchain platform divided into two parts: the Cardano Settlement Layer (CSL) and the Cardano Computational Layer (CCL) (CCL).

Users can transmit the native Cardano (ADA) coin to other blockchain participants during the CSL era, also known as the Byron age. It enables the immutable recording of transactions, just as other Layer-1 cryptocurrencies like Bitcoin. By merging several components published over the Shelley and Goguen periods, the CCL is a different layer that facilitates tokenization, smart contracts, and decentralised applications (dApps).

The Cardano network is a blockchain software development platform that allows developers to create smart contracts and decentralised apps. The Goguen mainnet, a blockchain platform with token lock network characteristics, was recently improved by Cardano. Now before moving ahead with Cardano coin price prediction, we need to know what ADA is. Knowing ADA is crucial because we will see ADA price prediction in terms of Cardano.

On the Cardano blockchain, ADA is a cryptocurrency or digital token. ADA, on the other hand, may be used to pay for premium network services. Users on the network may also transfer and trade their cash using crypto exchanges like Binance, Digifinex, and Upbit, to mention a few. Cardano’s crypto wallet, Daedalus, provides a secure location to store these currencies.

The Alonzo hard fork was implemented on the live network on September 12th, and the launch on the live network followed on September 12th. IOHL announced that they will be the backbone for a new decentralised application (DApp) platform, allowing Plutus scripts to be written and executed on-chain, enabling a wide range of DApp and decentralised finance (Defi) use cases, from simple swap type apps to decentralised exchanges (DEXs), and more complex computational programmes such as Oracles and crypto-backed algorithmic stablecoins.

According to statistics compiled by PoolTool, a total of $50.94 billion has been staked out of ADA’s $70.88 billion market capitalization, accounting for 71.97 per cent of the coin’s entire supply. Because just 28.03 per cent of the supply has not been locked, this might help sustain the ADA price.

Cardano has also announced partnerships with verities, land restoration and tree planting verification company, to secure its records on the Cardano blockchain; Rival, an esports and gaming platform, to develop NFT marketplaces; and UBX, a fintech venture fund, to create a public Cardano staking pool; and AID: Tech, which will provide technical guidance for its identity-based finance, payments, and insurance products.

ADA’s price increases were unable to be sustained as traders took profits, and the price plummeted below $2.50 on September 8. The price has been declining steadily, reaching a one-month low of $1.92 on September 21. While bitcoin and ether hit bottom on that day and have since rallied significantly, the ADA price has remained under pressure.

ADA price has dropped from third place to fourth place, trailing BNB, a native token of the Binance platform that was outlawed in the United Kingdom earlier this year. AMP, avalanche, luna, and sushiswap are among the bitcoin alternatives (altcoins) that have lost value in the last month as traders sold part of their positions to invest in the bitcoin surge. 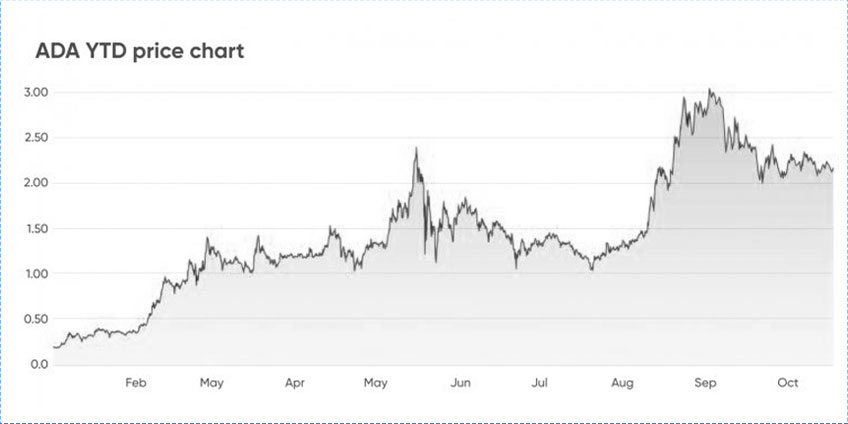 We have listed the ADA Cardano price prediction for the upcoming years in the following section:

Many believe that the market, including ADA, would soar upwards as a result of the approaching bullish trend started by Bitcoin. If BTC reaches $100,000 as expected, ADA might reach $10 by the end of the quarter.

In 2022, ADA is expected to reach $15 in the first quarter and go closer to $20. That is if BTC continues to rise throughout that time frame. For the rest of the year, the price of ADA may fluctuate a bit, but it should stay very consistent.

ADA might cost between $15 and $30 in 2023. Nonetheless, its price may continue to rise and hit $150, marking a new high for ADA. This is also based on ADA’s fundamentals, like the recently adopted smart contracts may be fully operational, bringing ADA one step closer to exceeding ETH.

Before Bitcoin’s halving event in 2024, the market may be steady yet unclear. When the latter occurs, the price of BTC might skyrocket once again. By December 2022, ADA might reach close to $200.

2025 might be a watershed moment for cryptocurrencies. When it comes to payments, trading, storing, and other functions, cryptocurrencies may have already surpassed traditional financial institutions. BTC halvings normally take effect in the first two quarters of the following year. As a result, by May 2025, ADA might be close to $1,000. 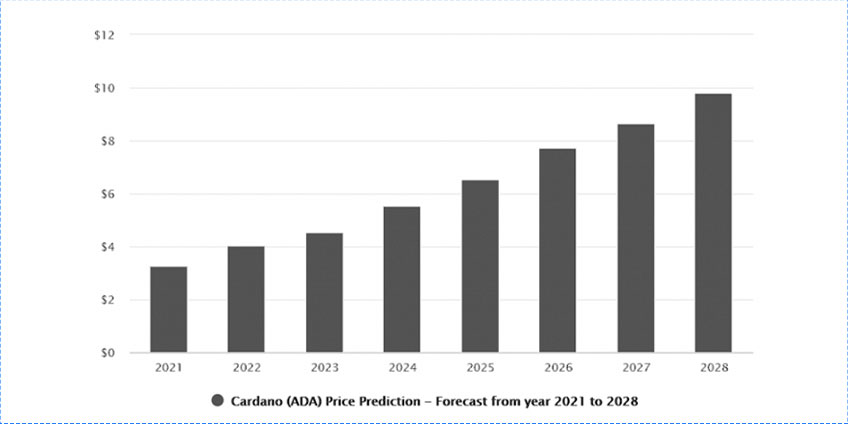 Since its inception, Cardano has been involved in several initiatives, either directly or indirectly. IOHK, the startup behind the Cardano Blockchain, also announced Atala, an enterprise blockchain architecture built for the Ethiopian government and other African countries, in April 2019.

Cardano later got into a relationship with New Balance, an athletic wear manufacturer, in September of the same year, allowing the firm to utilise the blockchain to detect phoney sneakers. Project Atlas and Project Catalyst were initiated by IOHK in 2020.

Altcoins (alternatives to bitcoin) have lately soared as private investors return to cryptocurrencies. The ADA coin from Cardano has lately gained popularity among miners. As of October 2021, ADA has a market capitalization of around $73.27 billion and a 24-hour trading volume of more than $2.4 billion.

As a consequence, Cardano is one of the top five cryptocurrencies. Part of Cardano’s recent surge is being driven by anticipation of a September upgrade that will incorporate smart contracts, which many believe would enable Cardano to better compete with the Ethereum network.

Smart contracts are digital agreements written in code that may be carried out without the need for an intermediary provided certain requirements are satisfied. Smart contracts enable non-fungible tokens, often known as NFTs, and decentralised finance applications. Second, the cryptocurrency network will undergo a software update that will enable it to compete with larger rivals such as Ethereum.

As part of the upgrade, smart contracts will be deployed to the network, allowing Cardano to reach out to additional potential investors. The software upgrade might be deployed in September 2021. Cardano’s price remained relatively stable amid the recent crypto crisis, indicating its sturdiness.

Cardano Vs Ethereum: Battle Of The Similars

The Cardano versus Ethereum argument is raging in the cryptocurrency world since both networks have comparable features and investors feel their preferred coin is the best to buy. Let’s look at the differences between Cardano and Ethereum:

Cardano has matured by becoming fully decentralised, which means its parent firm has given over ownership of the blockchain to the community. As a result, we can anticipate it to attract more investors, driving its price higher. This achievement will help Cardano better position itself to take on large crypto competitors.

Cardano is expected to be a competitor to Ethereum since it can be used as a currency as well as a platform for smart contracts, protocols, and decentralised apps, thanks to its blockchain technology. Furthermore, it is considered to be far more scalable than Ethereum.

It will also put the all-powerful Bitcoin to the test. This is because individuals who have or want to invest in digital assets are aware that diversity is one of the keys to successful investment. As a result, investors will seek to diversify their cryptocurrency holdings, which will eat into Bitcoin’s market share. So, you should invest wisely in Cardano after knowing Cardano price prediction for the upcoming years.