Kubernetes Vs Docker: Which One To Choose In 2022? 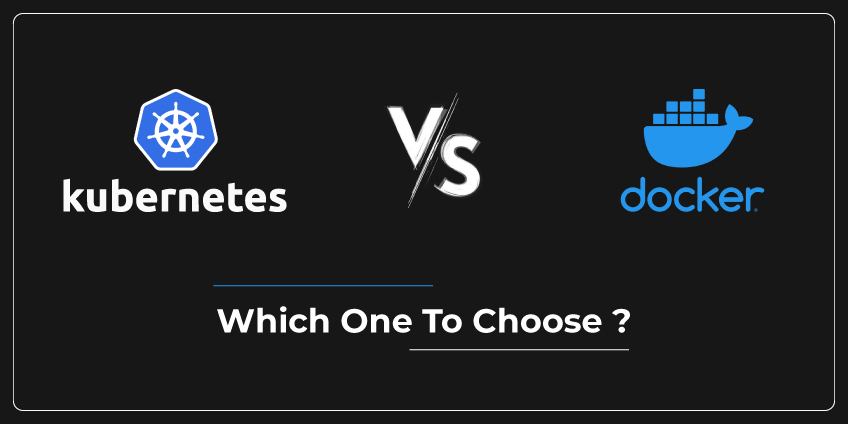 In the case that cloud-native technologies and containers are on your radar, you have probably come across the terms Docker and Kubernetes, and you may be wondering how they connect. In a word, they are technologies for creating, managing, and operating containers that are complementary and, in some cases, overlap.

In this article, we will see what is Kubernetes vs Docker. We will also see the major difference between Docker and Kubernetes.

Containers provide a solution to a significant problem that arises during the development of an application. When developers are developing code, they are doing it in their development environment on their computers. Some issues come up when they are ready to put that code into production.

The code that worked well on their PC does not function properly in the production environment. There are a variety of causes for this, including different operating systems, different dependencies, and other libraries. By enabling you to segregate code from the underlying infrastructure on which it is executing, containers have resolved the crucial problem of portability that has previously plagued the industry.

Developers can package their programme, together with all of the binaries and libraries required for it to execute successfully, into a tiny container image. Any machine that is equipped with a containerization platform is capable of running the container in production.

Containers and container platforms, in addition to addressing the primary difficulty of portability, provide several significant benefits over conventional virtualization technologies. Containers have very little environmental imprint. The container just requires a programme and a list of all of the binaries and libraries that it will need to function properly.

Container isolation, in contrast to virtual machines (VMs), which each include a full copy of a guest operating system, is accomplished at the kernel level without the requirement for a guest operating system. Furthermore, since libraries may be shared between containers, there is no need to keep ten copies of the same library on a single server, resulting in even greater space savings.

If we have three applications that are all running node and express, we do not need to run three instances of node and express; instead, the binaries and libraries may be shared by all three apps. Because programmes may be kept inside self-contained environments, deployments can be completed more quickly, there is more parity across development environments, and limitless scalability is possible.

When it comes to software containers, Docker is a technology that is used to design and execute them. A container is a collection of one or more processes that are all arranged under a single name and identifier and may be accessed from any location. A container is a computing environment that is separated from the other processes that are operating inside it, whether it be a real computer or a virtual machine (VM).

Docker technology is comprised of two primary components: the client command-line interface (CLI) tool and the container runtime environment. It is necessary to utilise the Docker CLI tool to send commands to the Docker runtime from the command line. The Docker runtime is responsible for the creation of containers and the execution of those containers on the operating system.

Docker makes use of two primary artefacts that are required for container technology to function properly. The first is the container itself. The second kind of container image is a template upon which a container may be realised at runtime, known as a container image.

A container does not have an independent existence outside of the operating system.

As a result, for Docker to function properly inside an automated continuous integration and continuous deployment (CI/CD) workflow, a real or virtual computer with an operating system must be present. Additionally, the Docker runtime and daemon must be installed on the target computer. In a typical automated CI/CD setup, a virtual machine (VM) may be provided using a DevOps tool such as Vagrant or Ansible.

In addition to being on the market at the correct moment, Docker was developed as an open-source project from the beginning, which contributed to its present market dominance. Docker is presently used by 30 percent of organizations in their AWS environments, and that percentage is continuing to climb. 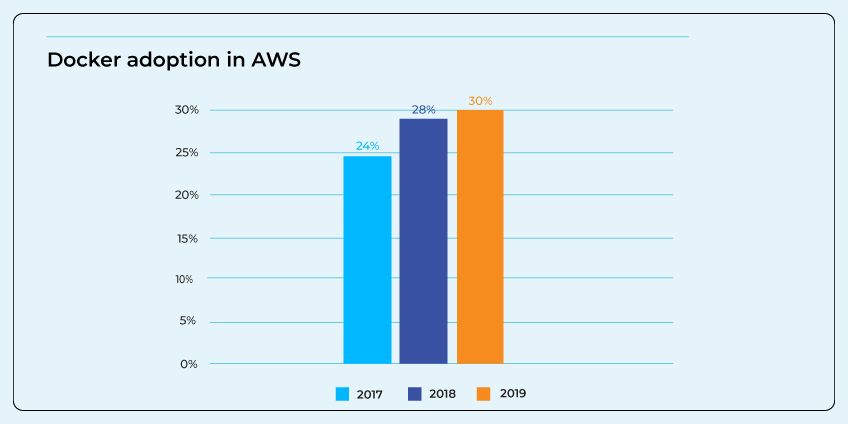 Generally speaking, when people talk about Docker, they are referring to the Docker Engine, which is a runtime that enables you to create and execute containerized applications. However, before you can operate a Docker container, it must first be constructed, which begins with the creation of a Docker File.

The Docker File contains all of the information necessary to execute the image, including the operating system, network settings, and file locations. Now that you have a Docker file, you can use it to create a Docker Image, which is a portable, static component that runs on the Docker Engine and can be used to execute other applications.

For those who prefer not to start from scratch, Docker also provides a service called Docker Hub, which allows you to store and distribute images.

While Docker established an open standard for packaging and delivering containerized programmes, a new difficulty evolved as a result of its adoption.

The reality is that managing containers in a real-world production setting is difficult when there are many of them. Containers in large numbers need the use of an orchestration system.

Working Of Kubernetes & Other Orchestration Systems

A container orchestration system such as Kubernetes or Docker Swarm must be able to:

As is the case with other schedulers, Docker Swarm offers a means of administering a large number of containers that are distributed over a cluster of computers. Its filtering and scheduling algorithm makes it possible to identify the most appropriate nodes in a cluster for the deployment of containers.

This was Docker Swarm vs Kubernetes. Now let us see what is Kubernetes used for!

What Is Kubernetes Used For?

It is the container orchestrator, Kubernetes, that was created at Google and has since been given to the CNCF and made publicly available as open-source. It offers the benefit of utilizing Google’s years of experience in container management to your advantage.

For the time being, Kubernetes is the industry leader and the de facto standard for orchestrating containers and delivering distributed applications on a large scale. Kubernetes is a container orchestration system that may be deployed on a public cloud service or on-premises. It is extremely flexible, open-source, and supported by a large and active community.

Companies of various sizes are making investments in it, and many cloud service providers now provide Kubernetes as a service to their customers. It is possible to run Kubernetes-powered apps with Sumo Logic since it supports any orchestration technology available.

At first glance, Kubernetes seems to be a complicated system, however at the end of the day, what Kubernetes is accomplishing may be summarised as follows: According to Cheryl Hung, a CNCF engineer, Kubernetes may be thought of as a control loop.

We may categorize the components into three major types of parts:

It includes the Etcd file system for storage, the API server for inter-component communication, the scheduler for determining which nodes pods should run on, and the controller manager, which is responsible for comparing the current state against the intended state.

The Kubernetes cluster’s aggregate computational power is comprised of the nodes that make it up. This is the location where containers are deployed and made to operate. There are nodes in your environment that represent the actual infrastructure on which your application operates, such as the server of virtual machines (VMs) in your environment.

Pods are the most basic resource in a Kubernetes cluster, and they are used to store data. A pod is made up of one or more containers, however, most of the time it is simply a single container that holds everything. As part of configuring your cluster, you may specify limitations for pods, which determine how much CPU and memory they need to function properly.

The scheduler makes use of this description to determine which nodes should be used to host the pods. When there is more than one container in a pod, it is impossible to predict the needed resources, and the scheduler will not be able to position pods in the most efficient manner possible. 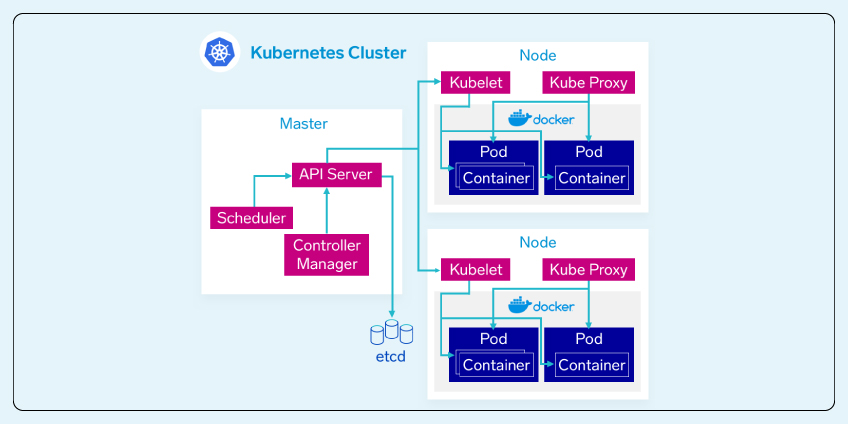 As we have seen what is Docker and Kubernetes, now let us study the relationship between them. Kubernetes and Docker are both complete de-facto solutions for intelligently managing containerized applications, and both provide a wide range of sophisticated features.

As a result, there has been a considerable misconception about the differences between the two technologies. The term “Kubernetes” is now frequently used as a shorthand for a whole container environment that is built on top of Kubernetes technology. In truth, they are not directly similar, have diverse underlying causes, and address a variety of different problems.

It is designed to manage large clusters of nodes in a production environment effectively. The Kubernetes ecosystem is built on the idea of pods, which are scheduling units (and may contain one or more containers) that are spread across nodes to ensure high availability.

Although it is possible to execute a Docker build on a Kubernetes cluster, Kubernetes is not a comprehensive solution and is intended to be used in conjunction with custom plugins. Although Kubernetes and Docker are fundamentally distinct technologies, they complement one another very well and both make it easier to manage and deploy containers in a distributed architecture.

Major Difference Between Kubernetes Vs Docker

Kubernetes Vs Docker: Which One To Choose?

Almost certainly, you have come across talks about Kubernetes and Docker that portray them as competitors giving the same fundamental functionality, with the inference that you would generally select one or the other in most cases. The fact that they are not in any way competitors and that their essential technologies are, for the most part, complimentary should have been evident by this point.