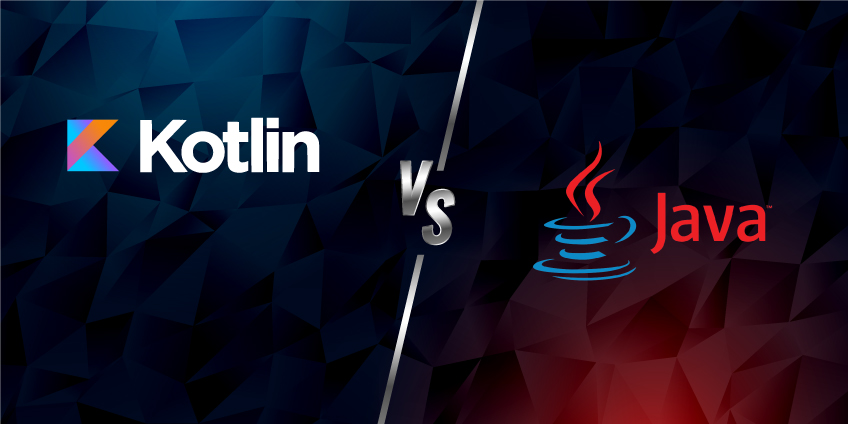 New developers want to know which language they are supposed to master to create current Android apps. The development teams want to ensure that Kotlin doesn’t affect the performance of its app, its capacity to recruit skilled engineers, or the general productivity of its developer.

But the key component determining whether or not the programming language is a success is that Android app development has become a regular trend to improve your company. Java is the finest option for more people because it is easy to access. But Kotlin’s arrival to the scene eroded developers’ faith in Java.

According to many reports, Google did not have much Java for Android advantage. It may be argued. So the best solution appeared to move to Kotlin. Let us go through this guide of Kotlin Vs Java. After this blog, you will get a better picture of which one should you opt for.

Choose The Best Between Kotlin Vs Java In 2022

Android Java vs Kotlin? What language is best used to design your next Android app?? Java is your language-on-go to build Android apps when you are a mobile app developer. But new languages are emerging around Java’s supremacy in the Android industry.

One is Kotlin, a relatively young programming language, which Google has previously designated as an Android-supported “first-class” language. We will try to understand Kotlin vs Java by going through these points:

A JetBrains team brought Kotlin to the development community to make Java coding more effective; in 2018, the programming language swiftly began to become one of a kind. Kotlin is a programming language that is compiled to JavaScript and runs on Java Virtual Machine (JVM).

Like Netflix, Trello, Uber, Twitter, Pinterest, and many others, tech giants are contemplating migration, using Kotlin to develop their Android apps. Kotlin is a Java Virtual Machine (JVM)-based Open Source static language, which you can also convert to JavaScript or native to construct iOS-operated programs. All it requires is to install and set up the Kotlin plugin.

Java is an easy, strong, and robust object-oriented programming language that is appropriate to a variety of applications such as Android apps, web apps, server apps, embedded systems, large data, etc. Sun Microsystems launched the language in 1995, currently an Oracle property, and most of the parts are open source.

With the Java Virtual Machine (JVM) support, Java was meant to operate on any platform with as little dependencies as possible and was supposed to be a WORA (written once run anywhere).

2. Android Kotlin Vs Java: Use Cases

Here are some incredible apps from Kotlin:

Here are some examples of notable Java-written open-source apps:

The coding speed of Kotlin and Java is about the same. It takes longer than using Java to find a solution to a task. That suggests a larger cognitive charge for the language. Kotlin is a good choice for an abstract thinker.

Java does not have Kotlin coding procedures. Since the coding performance difference between these two languages is not large, the judgment on this part is a draw for Java vs. Kotlin.

With the compilation of Kotlin and Java to ByteCode (which works with JVM), the comparison of memory use is a difficult process. With Kotlin’s Coroutines tool it is also easy to work with multithread programs. But, because of the huge amount of features, the language compiles and runs a bit slower than Java.

On the contrary, Java has fewer features than Kotlin and is easier to compile. Since the difference is small, the war between Kotlin and Java is likewise a tie. This was all about the Kotlin performance vs Java.

Stability is a measure in which a significant difference between the languages may be found. The language supports versions such as Java 8 and Java 11 for a long time and implies developers will repair the patch if anything works badly with those versions.

You have a free license for a developer to download different versions of Java. There are no long-term support versions of the language. While Java and Kotlin are both stable, Java eventually wins the stability struggle.

While there is lots of material to learn in both languages, it is easier to locate a lesson or book for Java, as it has long been used. Java is typically seen as the easiest language to learn and official material from Oracle may be found.

We feel, however, that the official documentation of Kotlin, albeit a relatively new language, is enough to understand how to handle it, and that the fight is also an attraction.

Java is more interested by developers than Kotlin, according to Google Trends. Although Java has seen some ups and downs, the language’s popularity remains well before Kotlin.

The Java lifespan is one of the main reasons behind this. Another critical reason is Java’s demand for less cognitive learning commitment. The fight for popularity is thus going to Java.

India has a significant junior developer population and Java is quite easy to learn, thus many start studying Android Studio Kotlin vs Java. This trend also goes beyond India, with young developers worldwide beginning to study Java. Since the community of Java is larger than Kotlin, this war is won.

Although the documentation for Java and Kotlin is sufficient, the former is flatter. To complete a problem, Java takes more code than Kotlin, but the programming language has been developing for a longer period and has a greater community so that the novice can locate the documents and help more readily.

On the other hand, Kotlin needs a higher cognitive learning investment than Java. It requires less code in general, though, making it suitable for developers or visual students. The struggle for the learning curve between Kotlin and Java is the latter.

Kotlin is one of the most popular technologies with around 8% of professional developers preferring that language according to the current Dev survey from StackOverflow. Although Google Trends ranked high, Java could not be included in the list.

Nevertheless, while Java is among the most popular technologies with roughly 44.1% of developers who “indicated an interest in further developments,” Kotlin still loves 62.9% of the language. Incidentally, when compared with $ 50K for Java, Kotlin gives greater money to the developers with an income of $55K a year. Kotlin thus wins the talent pool war.

Here are few reasons why Java got an upper hand over Kotlin:

Number one is that Java has reviewed exceptions while, inside Kotlin, it does not notice modest impacts of packages requiring exceptional specifications that can each increase the productivity of developers and improve code satisfaction. Without them, productivity was significantly reduced and code quality was not improved.

In every program, it is necessary to achieve an appropriate degree of maintenance to encapsulate an item’s representation. It is commonly used to enforce how callers connect with this, and illustration can alter without needing to transfer calls, as most individuals have APIs in non-personal or public sectors.

APIs remain unaltered. In Java, the colors of objects vary by representation, there are many beneficial cases. The approach of these fields discloses the fact that Kotlin has no non-personal fields to callers.

Now, things are changing rapidly in the Android development from Java to Kotlin; the creation of a static approach in Kotlin creates one of the greatest problems that developers have to confront.

Yes, that’s right, you heard it! Kotlin has no static keyboard if you are an Android developer and you want to utilize static keywords when you are interested in building Android apps in Java. Static variables belong to a category, and their case is no longer equal to static procedures, to form several static variables and static strategies.

These are Kotlin’s building blocks. In other words, every arrangement you see in Kotlin is primitive. Primitive types, therefore, have excellent processing time and memory efficiency.

Java has this capability available which helps to reduce code length. Kotlin doesn’t have that freedom in basic terms. Now you will confront some difficulties during development without the help of static methods and a ternary operator.

Why Is Kotlin Better Than Java?

But what are the upper edges of Kotlin over Java? Let us go through few points where Kotlin’s got an upper hand over Java:

Kotlin Vs. Java: Which One To Choose For Building The Best Android Application

Although Kotlin offers many benefits Java does not, there are also certain weaknesses. Recall that switching to a new language is not always thrilling for developers who already have discovered tools and tactics for them when they are allowed to play with Kotlin.

At least one month you will need to allow your team to get to know Kotlin, therefore certain members of the team may not adjust in time for the start of your Kotlin project. You must also remember that Java doesn’t go anywhere and is still vital for the creation of Android apps.

In 2021 there would be even tougher rivalry amongst the programming languages. Both of them have their fair proportion of pros and downsides taking Java and Kotlin into account.

However, the timeframe is too early for Kotlin to accept Java in 2021. Compared to Java, the user community Java enjoys is quite huge and will not be replaced soon.

But it is worth trying Kotlin if you’re a newbie looking for a new challenge, especially if you’d want to work on innovative start-up projects. However, it is essential to test Kotlin one step at a time if you manage a team of Mobile Developers to see whether the new language offers actual benefits to you.

Difference Between Kotlin And Java: Overview 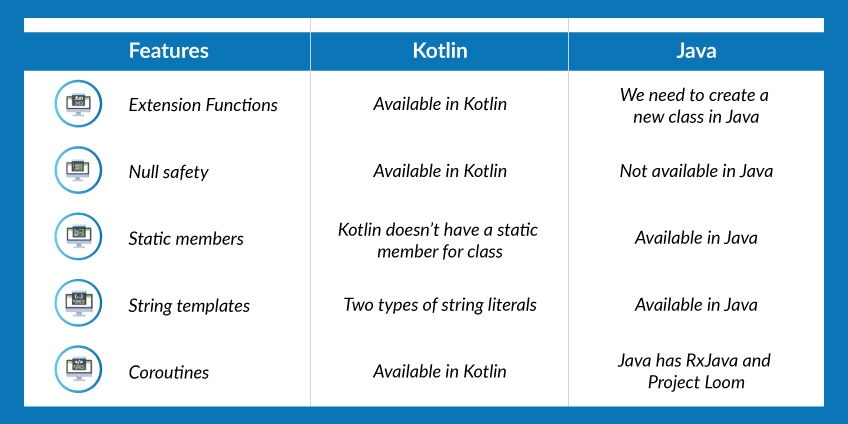