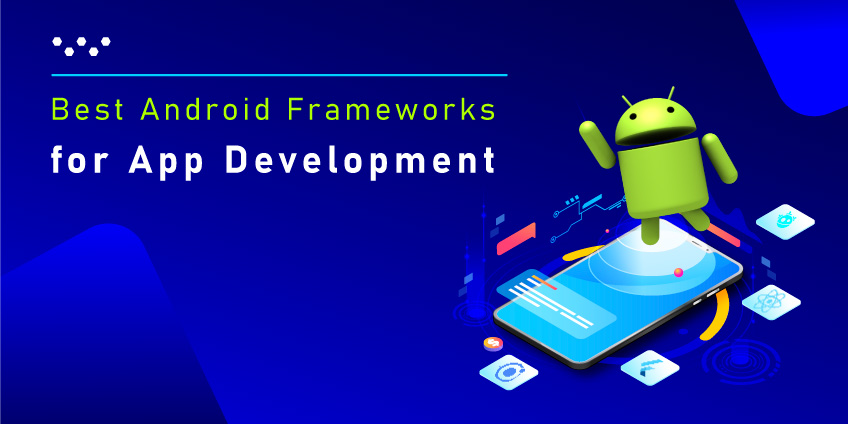 As businesses rush to embrace the mobile revolution to satisfy demand, mobile applications are becoming more complex, interactive, and user-friendly. In recent years, an increasing number of organizations have discovered that apps are critical to their brand experiences, as they may assist in establishing a strong relationship with customers.

According to Statista, the Google Play Store has over 2 million applications available for download. Many businesses, large and small, are already incorporating mobile applications into their marketing strategy since the digital arena offers a diverse range of interaction options.

The statistics (covered in the later sections) related to the Android apps was sufficient enough to push organizations and even the individual app developers into Android app development. The main question that arises is how to develop an application. Although “Android frameworks” is a simple answer to this complicated question.

Presence Of Android Application In Our Existence

Google LLC owns the bulk of applications in both the Google Play Store and the Apple App Store, with apps like Maps, Hangouts, and YouTube. Google is developing applications to enhance consumers’ experiences and build their bonds with the company. It’s a smart business move that you must employ in your business.

We might have grabbed both your eyes and ears after making you aware of these intuitive statistics. So, you might be wondering how to develop an Android app, and what are these Android frameworks that you need to choose. Now we will tell you the basics of Android development frameworks, and the basic attributes of superior frameworks for Android development.

What Are Android Frameworks?

In the case of Android applications, a software toolkit that enables app developers to put together a final product that is tailored to the needs of the owner is used.

Many of the same characteristics are shared by different Android app development frameworks, as well as unique aspects that make them better suited to specific sorts of applications. The application framework you choose should be tailored to your project’s particular requirements.

These are the major features of Android app frameworks:

One of the most widely used cross-platform programming frameworks is Ionic, which was developed in 2012. It’s an open-source framework that has been validated by MIT to allow developers to take advantage of contemporary web technologies such as HTML5, CSS3, and JavaScript.

When To Use Ionic Framework

The ionic development framework was created with developers in mind to help them create hybrid and interactive mobile apps. With its comprehensive range of features, motions, animations, and software tools, you can create high-quality mobile, desktop, and Progressive Web Apps with just one codebase.

The Ionic framework also makes use of Cordova plugins, which enable developers to access numerous framework components, including as the camera and GPS, with relative ease.

In a recent study of more than 90,000 developers, React Native was rated the 8th most popular cross-platform application development framework, with more than 60% of votes, as well as the 3rd most desired framework. It’s also one of the most popular open-source platforms, with around 68,690 stars on Github.

In 2013, the platform began as a Facebook internal hackathon project. It enables developers to create apps for both Android and iOS using React, a versatile JavaScript toolkit. It is recognized as one of the greatest open-source applications for mobile development because it was created by Facebook.

When To Use React Native Framework

Furthermore, React Native effectively addresses some of the most important issues that developers face, such as iteration time, codebase differences, and imperative programming, while also simplifying customized code reusability and community-driven technology, which allows developers to freely contribute to the current framework.

Flutter is a mobile app development framework developed in the Dart programming language that works with existing code.

When To Use Flutter Framework

Developers from all around the world who want to be successful with hybrid app development. It has a single codebase, and its apps completely compile to native code by utilising Google’s Skia 2D rendering engine to provide aesthetics that are similar to the Material Design and Cupertino styles.

In the end, everybody compares Flutter with React Native. We have covered a detailed guide related to Flutter vs React Native here.

The local Android improvement stage, similar to the numerous others we’ve as of now audited, is quite possibly the most broadly utilized versatile programming framework on the planet. The SDK gives engineers the API libraries and designer instruments they need to make, test, and troubleshoot incredible Android applications.

When To Use Native Android Framework

Developers that need to write native code for sections of their applications will be able to use some of these native libraries straight from their native code if they use C or C++. With over 2.5 billion monthly active devices, the Native Android Game SDK gives game creators an unprecedented reach.

It’s an open-source platform for using.NET to create contemporary and performant apps for iOS, Android, and Windows. Developers don’t hate it as much as they do React Native.

When To Use Xamarin Framework

Developers adore Xamarin, and businesses rely on it. Xamarin and.NET are used by companies all around the world to create high-performance native mobile apps. Xamarin is for developers who wish to exchange code, test business logic across platforms, and construct cross-platform apps in Visual Studio using C#.

NativeScript SDK is another wonderful alternative for an app development framework that is featured among the finest hybrid app frameworks if you want to speed up your mobile app development.

It provides app developers with an open-source framework for developing genuinely native mobile apps with Angular, Vue.js, TypeScript, or JavaScript while sharing the application code across platforms. It is backed by a Bulgarian software business, Telerik, and is entirely free.

When To Use NativeScript Android Framework

NativeScript is an excellent alternative for developers that want to create apps for numerous platforms in a short amount of time and at a low cost. It gives you full access to all iOS and Android APIs, as well as the ability to effortlessly reuse CocoaPods and Android SDKs, as well as locate free templates, plugins, and app examples.

NativeScript has a large number of supporters in the corporate sector, including Symantec, Xerox, Dell, and Microsoft, as well as hundreds of developers that use it to create cross-platform mobile apps, primarily for B2B IT firms.

jQuery Mobile has you covered if you want to dazzle your mobile audience with compelling applications. jQuery Mobile is an HTML5-based cross-platform development framework that makes it simple for developers to create both mobile and online applications. The Query Mobile framework takes the mantra “write less, do more” to new heights.

This means you can create your code once and it will run on almost any of the needed platforms, including Windows Phones, Symbian, and Blackberry.

When To Use JQuery

Any mobile developer that wants to create professionally branded and responsive apps that will run on the latest smartphones and tablets as well as desktop platforms. The jQuery Mobile builder adds to the functionality by integrating a custom JavaScript file and structure-only style sheets.

It also includes plugins like Pop-Up Boxes, Image Slider, Content-Slider, and others that make web pages easier to navigate, more user-friendly, and more interactive. It has a ThemeRoller for an easy drag-and-drop capability to make it easier for developers. It’s also interoperable with other mobile app frameworks and platforms like Worklight and PhoneGap, and it has a large user community.

Framework7, the newest kid on the block, is a full-featured Android development platform that helps developers create apps for Android, iOS, and desktop. It’s a free and open-source mobile HTML framework that only requires a simple HTML layout and the framework’s CSS and JS files to operate!

When To Use Framework7

If you know HTML, CSS, and a little JavaScript, you’re almost ready to start building Framework7 apps. Developers that are familiar with the fundamentals of HTML, CSS, and JavaScript will find Framework7 to be a breeze to work with. Framework7 is not compatible with all platforms, however, it concentrates on iOS and Google Material Design for the best user experience.

The cross-platform development framework is available for free and allows developers to create apps and games for mobile, desktop, and connected TV devices using a single code base. It makes use of the Lua scripting language and has over 1000 built-in APIs, a large number of plugins, and Corona Native extensions to assist you in making your app creation a reality.

It is a powerful, lightweight, and easy-to-learn language. Corona SDK is meant to allow for super-fast development, allowing you to work on a project and then publish it to a variety of devices such as phones, tablets, and televisions.

When To Use Corona SDK

Corona SDK is a popular general-purpose Android programming framework that is utilised widely by game developers. Corona SDK allows you to view changes in the simulator immediately and iterate swiftly, whether you’re designing commercial apps or games. Its app backend technology is also built on Lua, which is simple to understand and utilise.

Its API selection makes it simple to add complicated features, and its workflow allows you to view any changes immediately. Its unrivalled development and iteration pace will appeal to you.

Finally, there’s the Appcelerator Titanium SDK, which is one of the most widely used cross-platform mobile development tools today. It’s a free and open-source application development platform, similar to the others we’ve looked at, that allows developers to create native apps using web technologies like HTML, JavaScript, and CSS without needing to know Java or Objective-C.

It’s simple to use and so common that Titanium-based apps are projected to run on 10% of all mobile phones worldwide. To increase performance, the platform uses JavaScript to generate native code.

When To Use Appcelerator Titanium

Titanium is an amazing choice for mobile developers since it provides everything you need to create great, native mobile apps from a single JavaScript codebase. It provides the same performance as native API-based apps, with the added benefit of being extremely quick.

Apart from these Android studio frameworks, we are mentioning four other Android UI frameworks that you could use for developing and publishing an Android app.

Kotlin was designated as an official IDE (Integrated Development Environment) for Android development by Google in 2017. It operates on the Java Virtual Machine (JVM) and is fully compatible with the Java programming language.

It is frequently used as a substitute for Java since it greatly simplifies the development process. Many Android programmers have chosen Kotlin as their primary language.

Sencha Touch includes approximately 50 UI components and native themes, allowing developers to construct engaging and attractive apps. Because the framework makes use of hardware acceleration methods, the apps produced with it are extremely fast.

HTML5 is used to power this website. Feedback, content updates, polls, push alerts, and other features are included in the framework’s pre-built blocks.

SproutCore is an open-source JavaScript framework for creating lightning-fast apps with rich functionality. This HTML5-based framework, created by Apple, provides customers with a clear MVC design that allows for application speed optimization and scalability. SproutCore, unlike other JavaScript frameworks, has a full set of capabilities for creating a desktop-like application in the browser, including routing, UI components, testing, and deployment.

The most significant android tools for developing any successful mobile or online application are Android frameworks. It’s important to note that each project or app has its own set of requirements, thus selecting a framework should be done with care and after considering all other relevant variables. Make sure that you follow the norms of developing unbeatable mobile applications.

That said, the Android frameworks may significantly improve your mobile development experience, so take the time to go through the frameworks we’ve provided.